I am a normal girl. I like flowers and sunshine like most other girls. This was my work life tonight.

Me: Hey how’s your night going?

Me: Ok babe. Just keep seeping those std’s out your penis

(Walk away)
5 mins later in the smoking room when he tries to scab a cigarette
Me:No I don’t think so. I thought you were just going staunch and wanted to snort drugs off my arse crack?

Me: like I said, keep seeping them std’s out your dick. Seeping. Such a great word. Thanks for giving me the opportunity to use it. I’m not into financing the bad habits of dirty misogynist.

Me: No…pigs are too cute. You’re just a sexist imbecile. Well done. You’re now getting a talking down by a stripper in front of a room full of people. (Guy nodding in the background, everyone else is silent. It’s not comfortable. It’s all I can do to maintain my smile)

He: why would you even say that? (Obvi trying to imply I’m the one with a problem with what I do for a living)

Me: Cause from what I’ve gathered about you so far, you’re a horrible person with little man syndrome who comes to places like this to try and demean us. Textbook misogynist.

Me: yes you are. Imagine that? A woman smarter than you are and not reduced to tears by your attempt to demean her.

He: I wasn’t aggressive to you.

Another dancer: yes you were rude from the start!

Me: truckers keep on truckin. You’re actually a caricature of a shit character in a shitty movie no one wants to watch.

He: Says she with the dirty regrowth

Me: Regrowth is my personal choice as a free woman.

Me: No. I don’t think there are feminists anymore babe. Just misogynists, sexists, then the rest of us normal people.

Guy witnessing the scene: boom
Sigh. PS – this guy is married. Poor woman.
As much as I slayed this utter fuckwit and I’m proud of myself for maintaining a smile the whole way through, I was shaking by the end and am still saddened by it all. Night after night having to persevere, having to fight to be treated like a human being, fight to be afforded the respect that should be given freely. It’s enough that I am also now fighting with myself to keep my eyes dry. Even though I’m home safe now, the accumulated effect of this, on top of the 3 customers who asked the price for extras, for me to allow them to touch or kiss me, to take me home – it’s too much. It’s awful that this behavior is so prevalent and yet people seem surprised to hear of domestic violence, sexual assault, sexual coercion. The media focuses on it every now and then as though it’s a recent developments, a sudden epidemic. It’s not. This is our culture. This is the world we live in. This behavior is never outwardly endorsed but it is ignored and thus perpetuated.

Westerners have no right to be be critical of other cultures and religions when this shit is so prevalent in our society.  If you want to see what the real cultural climate is, work in the sex industry for a week and have your eyes opened. 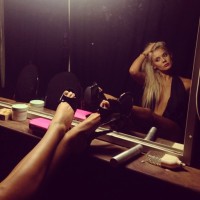