One night when I was working at Stringfellows in London, I was chatting with an Aussie suit and all of a sudden he told me that I was fat. Too fat to be a dancer.

I was chubsome, about 9kg heavier than I am now, but not fat. Having said that I have always been prone to eating my feelings, so it was only natural for me to console myself by instantly ordering a big bowl of hot chips with a blood bath worth of tomato sauce from the kitchen. Even in my anguish, I could appreciate that they were depressingly derishuss.

My dear friend and colleague Misty was horrified at his unabashed and unprovoked maliciousness. We had all been standing around having a nice old chat prior to his dropping the fatty. In between strawberry daquiris, she went over to him and asked if he had had terrible acne growing up. He was taken aback and asked ‘Why?’ She then pointed her finger at his face, twirled it around in circles a couple of times, squinting her eyes as she moved her face closer to his and gently said “Mmmm, it’s just that even from across the room I could see these cratering scars pokking all over your face.” He was pretty upset. I think he got the picture, “Do unto others…”, and all that.

He really did have a pepperoni pizza face. I’d say he still has one but suck shit asshole, I dropped my extra kg’s years ago. Perhaps if you’d asked nicely I would have let you use my third arse for a skin graft. 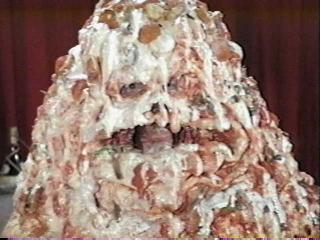